December 2nd is my 2nd annual Studio Sale! There are details and a map on my website for those interested in coming out. It's a perfect opportunity to pick up that painting you have had your eye on, or a gift for the art lover in your life. My entire inventory will be available, plus calendars and a brand new collection of 10x10 squares, ready to go at studio prices.

If anyone had told me ten years ago that I would be a weaver, I’d have said that they were crazy. After all, I had a busy home-based fashion business, specializing in bridal design and dressmaking. But after doing this for many years, including a return to school for more formal technical education, I burned out and needed some time off. I took up knitting, which eventually led to spinning. Yes, with a spinning wheel, not a bicycle (though I do that too). It is how you make yarn. It seems only natural in retrospect that I would end up sitting in front of a loom at some point. After all, a love of textiles has been a part of my life for as long as I can remember.

I’m all about colour and texture. Like my sisters, I paint and draw, but my favoured medium is cloth. I am a relatively new weaver, having only been at this for six years now. With each project, I learn something new that I can apply to future endeavours. Weaving is a multi-faceted activity which combines a variety of elements to produce a finished piece. Some of these seem very obvious to me, yet may not to those without exposure to the process.

First, there is the choice of yarns. This is where I start. The fibre type, whether wool, cotton, alpaca, silk, or another fibre, will dictate many of the characteristics of the cloth; its drape, loft, and warmth. Also too, the yarn diameter and texture play an important role. Colour may be what we first see when considering a piece, but it probably has the least impact on the attributes of the cloth itself. Having said that, for me, colour is the second most important choice I make. 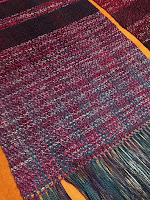 This has led to experimentation with hand-painting dyes onto my measured yarn (the warp) before putting it on the loom. So much more interesting than flat colour! This also guarantees that no two pieces will ever be the same. This is particularly the case with my tencel scarves. They are dyed with a technique involving snow or ice to break the chemical bonds in the dyes, resulting in unpredictable watercolour effects and sometimes unplanned colours. Next up will be combining these hand-dyed warps with handspun weft yarns.

Layered onto the yarn is the choice of pattern. Weave structure determines whether one yarn dominates or if both are equal partners and how dense or drapey the finished textile is, among other things. Sometimes the marriage of yarn, colour, and pattern is a gamble and other times it is a perfect match. As with all thing artistic, creative play can be as valuable as experience in putting all the elements together to create an aesthetically pleasing and functional piece of cloth.

I’m looking forward to sharing my passion and some of my work with you next weekend!

Posted by Marianne Morris Art at 6:00 AM No comments:

December 2nd is my 2nd annual Studio Sale! There are details and a map on my website for those interested in coming out. It's a perfect opportunity to pick up that painting you have had your eye on, or a gift for the art lover in your life. My entire inventory will be available, plus calendars and a brand new collection of 10x10 squares, ready to go at studio prices.

From my earliest memories, art and nature have been in my life.  I was either sitting in my room drawing or out climbing trees.  I was the kid that always brought home the stray dog or a hat full of baby squirrels.

I’ve always loved being out in nature, at the beach, in the woods or traipsing through the creek.  This is where I feel whole.  I love camping, building camp fires, cooking outside, being away from cities, towns and people.  I’ve always been more comfortable in nature or with animals than with people.  I am an introvert by nature and need lots of alone time.  Nothing inspires my creativity more than being in nature.

My paintings help you return to a place of nature, so you can remember what it was like to be in that space.  You can almost hear the leaves rustling in the wind, the waves crashing against the shore. You can hear the birds singing their song.

Remember what it’s like to stand on the edge of that stream.  Recapture that sense of awe while watching the pelicans fishing or the hawk hunting.

Remember and relax and breathe.

More of Brenda's work can been seen on her Facebook Page, or our FB event page.
Posted by Marianne Morris Art at 6:00 AM No comments:

Email ThisBlogThis!Share to TwitterShare to FacebookShare to Pinterest
Location: Mississauga, ON, Canada


This is my last painting of this little "mini-series" of Autumn to Winter pieces. It's not my standard 10x10... its a bit bigger at 18x18". I have a few of these boards hanging around, so I figured I may as well use them. But since it's square, I'm going to include it as one of my 100.

I wasn't sure what was going to happen with this one when I started it. I was two sessions in when I realized it was a landscape. I think this one is an even more obvious landscape than some of the others I've done, but when I'm beginning a piece I try to keep my mind open, and look at it in all directions before I decide.

The foggy sky on the right was something I didn't want to obliterate as I went along. I liked the effect of the veil of white over the colour. Even my pencil scribbles show through. For a while there was no defined edge dividing the sky and the ground, but it didn't look quite right with the earth and sky blending together. Sometimes it works, but here it just didn't seem to. It was the hits of metallic at the end that seemed to pull it together. Up until then it seemed kind of ho-hum... I guess because there was such a large dark mass along the bottom and left. The bronze added the metallic effect, along with lightening the area up a bit to add variety.

I like that this piece feels very much like those grey autumn days, where the vibrant colour of the leaves contrast with the grey, misty quality of the sky. Much like how things have been around here for the past couple weeks. But seriously, stop raining already. We've all had quite enough.

My calendars are now online, for anyone who may be interested in ordering one. I got a great reaction to my advance subscriber link, so now that I'm sure anyone there who wants one has got it, I will make the link public for anyone else. Having an e-commerce site makes life so much easier... I remember when I did this in 2015 I had a spread sheet trying to keep track of orders and which ones I had shipped... it was a bit stressful as I was sure I'd miss something. Now it's all there on the website, and I can mark them shipped as I send them out, and it keeps track of how many I have left! Oh the wonders of technology!!

I've also set the date for my 2nd annual Open Studio show and sale. Mark December 2nd on your calendar! I will have most of my inventory at home (I have a few pieces still at Pixie Blue) and out for viewing. As an added bonus, both my sisters are coming out to help, and bringing a few of their creations with them. I will be posting some of their work next week on the blog. Stay tuned!

Posted by Marianne Morris Art at 7:18 AM No comments:

I've been procrastinating writing this week's post. I have new work to post, but I'm feeling a bit worn down so I don't really feel like writing. I'm doing it anyway, because I feel like I should... maybe this is a sign I need to take a break for a bit, but I have a lot happening until early December so it won't be until after that.

I have been getting my website ready to update with my calendars and my new pieces. There was a wee printing issue with my calendars so I have to have half my batch re-run, which delays my release a bit. The website is ready though, just as soon as I get them.

I'm having an open studio on December 2nd. I've been recruiting some help and trying to get my house ready for visitors, even though it's still a month away. Since I still had some bare drywall from last year's renos, we decided a coat of paint was in order. We painted the entire main floor. It looks great, but we went from a medium colour to a very light one, so two coats were necessary. This led to me going through various closets and cupboards purging. Even though I try not to buy a lot I still seem to accumulate a lot of stuff. And I tend to be a bit of a hoarder... I still had a jacket that I've had since my adult child was a toddler. It's off to the Salvation Army now, because it's still in decent shape. It may even be fashionable again in a couple years.

My new job is going really well. I work with some amazingly creative people. It's the only place I've ever worked where Halloween was treated like a team sport. The costumes were amazing. I didn't really participate much, as every other place I've worked there was only ever a handful of people who bothered with a costume at all. I thought this would be the same. Omg, no. Departments created elaborate group themed costumes, entire areas were decorated like movie sets, the photo studio set up a backdrop and took professional photos, prizes were given out. I can't even imagine what Christmas is going to be like.

This is my next to last painting in this mini-series of "autumn to winter" paintings. I will be releasing the lot of them for prints shortly after next week's post, so if there is one you love, it will soon be available. The set of original paintings won't be online until after my open house. I still have others to post... I just find that the time it takes to do the photography and create the web page eats into my limited studio time, so I don't update as much as I should. After my studio sale I will take a few days to do what I need to and upload everything.... I don't want to create unnecessary work for myself so I'll wait until after I see what sells.

Hope you all are having some fun and enjoying the transition of the seasons. It really is a glorious time of year..... once it stops raining, that is.

Posted by Marianne Morris Art at 6:30 AM No comments: