Arts on the Credit: Part 2

April 12 and 13 this year I am participating in Arts on the Credit, an art show and sale held in the lovely Waterside Inn in Port Credit, Mississauga. A couple weeks ago I shared the work of a few of the participating artists... this week I thought I'd share a few more. 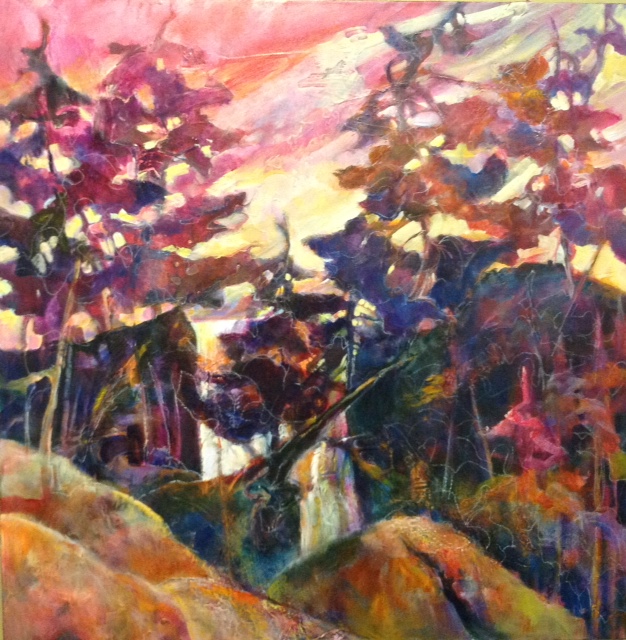 Gorgeous landscapes in vibrant colours. There's some great pieces on her website... but I know from experience that it's never possible to quite capture the colours in a photograph. You really have to see it in person.

I hadn't met Sue until a few weeks ago, but I'd seen her name around connected to the local Arts scene before. Along with local textile artist Marie Payne, the two have made it a mission to improve the arts community in Mississauga by organizing events like this one. She will be exhibiting here along with her duties as organizer... I really don't know how she does it. I can barely manage to get myself organized. There's an interview with her posted on the show's blog, which makes me even more curious to see her creations.

There's no website that I could find devoted to her work... probably because she's so busy organizing things like Arts on the Credit!

From what I've read, Kristina creates all sorts of things, but these lamps... oh my goodness, they look beautiful. They strike me as vaguely Art Nouveau, very sculptural... something that would definitely add flair and style to any room.

Lots of really great stuff on her website, kristinakirkwood.com. 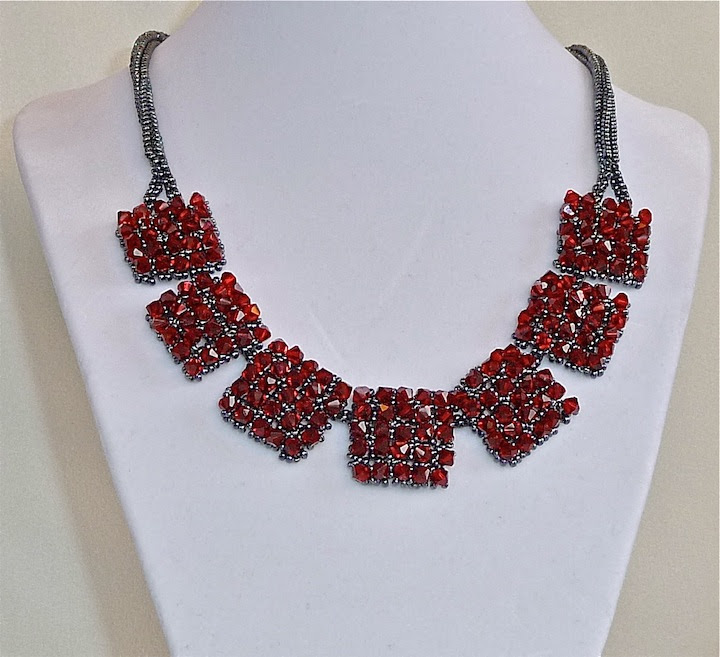 Anyone searching for a unique piece of jewellery for a special occasion will want to stop off in Craig's booth to see his creations. One of a kind and made by hand, these pieces will become family heirlooms.

See more of his inspired designs on his website: craigewing.ca

So, that's a brief overview... of course there is more, and if I had more time I'd go through everyone. You can check out a full listing of who will be exhibiting on the show's website. There are a few names well known in the local arts community... it really is going to be a great show. If you plan on heading out to this event, there is a ticket for complimentary admission going out in my April newsletter (which you can sign up for HERE), along with a coupon for a 10% discount for anything purchased from me in the month of April. I've got 3 events lined up, so there's plenty of opportunity to check out my work. Here is my schedule for April:

Arts on the Credit: Saturday and Sunday April 12-13

Art in the City Charity Art Show and Sale: Friday April 25th. I couldn't find a website for this event, but I will find out and post something closer to the date.

Posted by Marianne Morris Art at 11:24 AM No comments:

Arts On The Credit: preparations continue 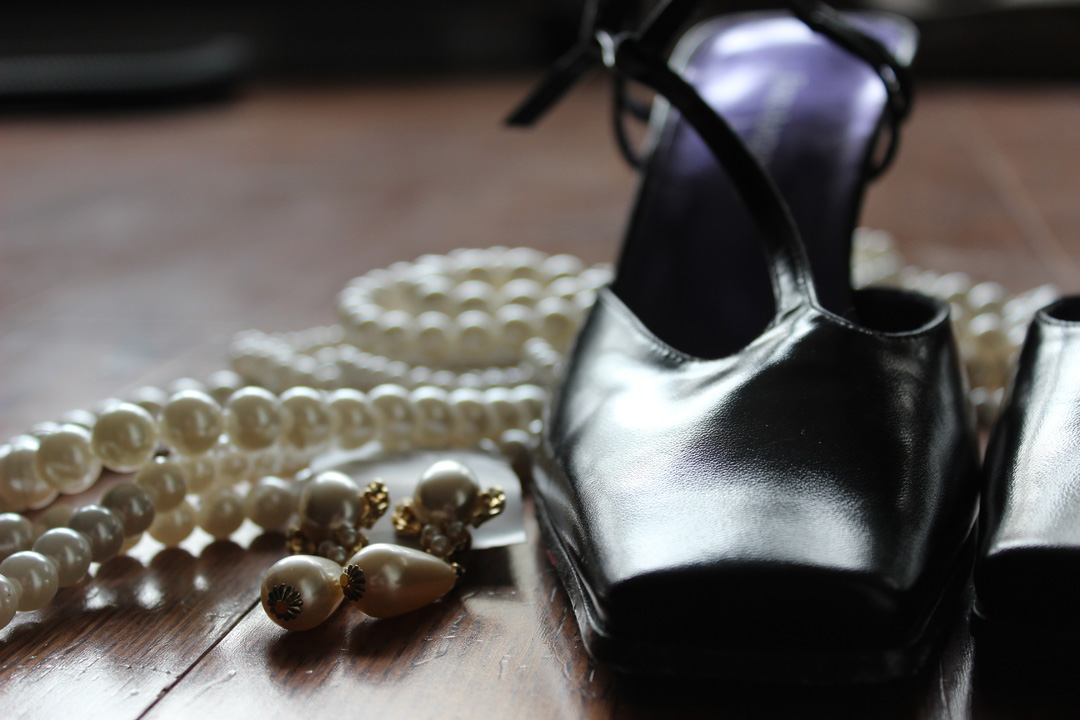 When I dropped off my painting at the Waterside Inn last week, it occurred to me that this was an event I was going to have to dress up for. For those who don't know me personally, I am not really that kind of person. In fact, my idea of dressing up is putting on my "good" jeans, and finding a t-shirt that doesn't have paint on it. Thinking about what I was going to wear to this thing had put me in a bit of a panic. I've had to dress for openings before, but this was going to be a little different. I wanted to do something that would fit... something that would give my space the atmosphere I spend so much time trying to create in my paintings. So I spent Saturday afternoon this week scouring my local thrift stores, searching for some vintage-looking accessories. I had a few great finds... like these shoes reminiscent of the 20s. They actually have a splash of red paint on one heel... probably why they were abandoned by their owner. I almost laughed out loud when I saw it... obviously they were meant for me, since nothing I own lacks a little paint.

Preparations for Arts on the Credit continue. I've matted all my little studies and experiments, and even framed a couple. I've retrieved a bunch of work from the gallery in London, and I'm off to St. Catherine's next weekend to pick up the stuff I have there. A friend has my display racks, so I have to fit in a trip there at some point as well. I've got most of my new work varnished, and only have a few left that require hanging hardware. All this stuff could probably have been done in a week if I didn't have a day job, but since I do I've just had to fit it in where I could find the time. I still have stuff to do.... I'm hoping I can find a few hours over the next couple weeks to actually put brush to canvas. Not likely, but I can dream...

For those in the Toronto area, the weekend before AOTC, Sunday April 6th,  I'm at the Lakeshore Yacht Club again for their annual charity art show. It's a bit different this year.... Instead of doing the auction, the artists are donating 15% of all sales to the Toronto Humane Society. I won't have as much work there as I have a much smaller space to fill, but I'll have some of my smaller pieces there for sale. If you are interested in attending, contact the club for details.

Posted by Marianne Morris Art at 9:00 AM No comments:

Taking a week off...

Sorry, no post this week. I'm exhausted, cranky, feeling like crap... decided to just skip it this week. I'll be back next week, hopefully with something interesting to say.
Posted by Marianne Morris Art at 10:13 AM No comments:

Arts on the Credit: Part 1

April 12 and 13 this year I am participating in Arts on the Credit, an art show and sale held in the lovely Waterside Inn in Port Credit, Mississauga. This promises to be a really good event... I'm blown away by some of the work I'm seeing posted from participating artists. There's a good variety of styles and mediums, from realism to abstract, oil paint to textile.  Added in to the mix is a few fine craft artisans, including jewellery, pottery and wood.

I know it's still a month away, but preparation is eating into my production time (I'm doing the stuff I tend to put off... price lists, tags, adding hardware and varnishing works that have yet to leave my studio...) so I have little new work to share. Instead I thought I'd share some work from some of the other great artists I will have the pleasure of exhibiting with.

I know Alison from my local art group. Her little textile butterflies are totally captivating. Her attention to detail is amazing... they are accurate and displayed as if they were specimens in a Entomologist's collection.

I also met Annette through my art group, and recently had the pleasure of taking a look through her portfolio. Her figurative work is imaginative and original, but I couldn't find an example online I could link to. This photo has been donated as a prize for the draw, so attendees will have a chance to win one of these prints.

You can see more of her work here:
www.aseipphotography.com

Lorraine's work came to my attention a couple years ago through a friend who also does large textile work. I'm pretty excited to see this stuff in real life... it looks so interesting in the photos.

There's a write up about her on the show's blog, if you are interested, and you can see more of her work on her website:
www.Lroytextileart.com

Justin's work seems to be popping up all over the place lately... or maybe it's just that now that I'm aware of it I notice it more. He's part of the Ontario Society of Artits show on through March. You can check out more on his website: www.justinblayney.com

I'll do a few more artists in upcoming weeks. Oh, and my April newsletter will have a coupon for a discount on any piece of mine purchased in April. If you want to get in on that, you can sign up HERE.

Posted by Marianne Morris Art at 9:35 AM No comments: 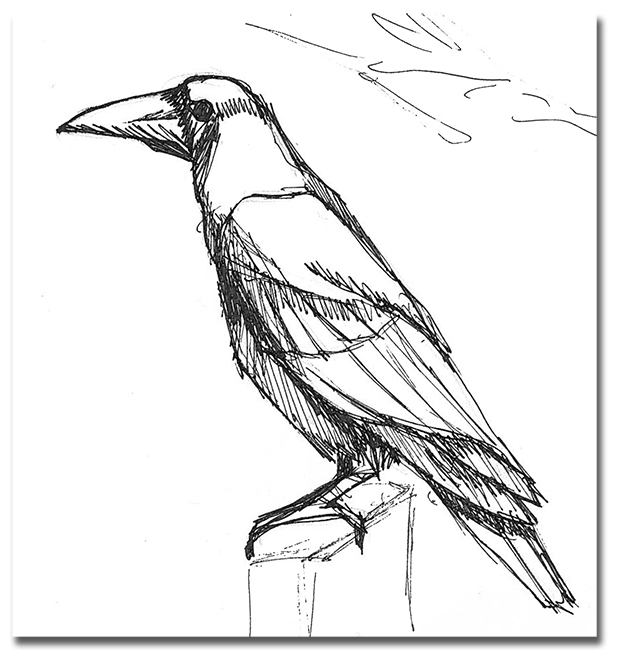 This past month I had a short exchange with artist Anthony Greentree, on Twitter, who holds a monthly art challenge. February was "#linefebruary"... where you can draw anything in any medium, but can only use line. I commented that I thought this was a great idea, and next thing you know I'm on the list. I hadn't intended to participate, but whatever, I'll go with it. Now I haven't done line drawings in many years. Many, MANY years. I pulled out a sketchbook that I had bought and never used, sharpened up my pencil, and... ok, well, let's not shade that quite so much. I'll try ink.... ick. Was I ever out of practice. Page after page... awful. The last time I seriously drew in ink was when I spent the summer in Europe, in the late 80s (yes, I am that old). So I kept going, and about 20 sketches in I started to get the feel of it. All of my drawings were of the same subject... birds.


I have a thing for birds. It's not new... even looking back over my sketchbooks from school I have doodles and drawings of birds sprinkled all through them. I think part of the appeal for me is that they are used as symbols throughout history, from Ancient Egypt to Native American mythology. They are mystical, and magical... and majestic.

I don't really sketch (or at least I didn't until this month). I did it because it was something every teacher told me I should do, but I didn't really enjoy it all that much, so I stopped when my life got busy and it got too inconvenient to carry around a sketchbook that I rarely used (I had a baby and suddenly I had too many things to carry... the book just wasn't going in the bag). What I did do was get kids books from Goodwill recycle them. I prefer the board kind because they take a lot of abuse. I sand off the varnish, gesso them and repaint the pages. I have a pile of these little books, most of them thematic in some way. And yes, I have one devoted to birds. They're not that big... most of them only have about 10 pages, so I will do one spread when the mood strikes me and put it away until the mood strikes again... sometimes months later. Since my brain was focused on birds, I pulled out my books and did a couple new pages. 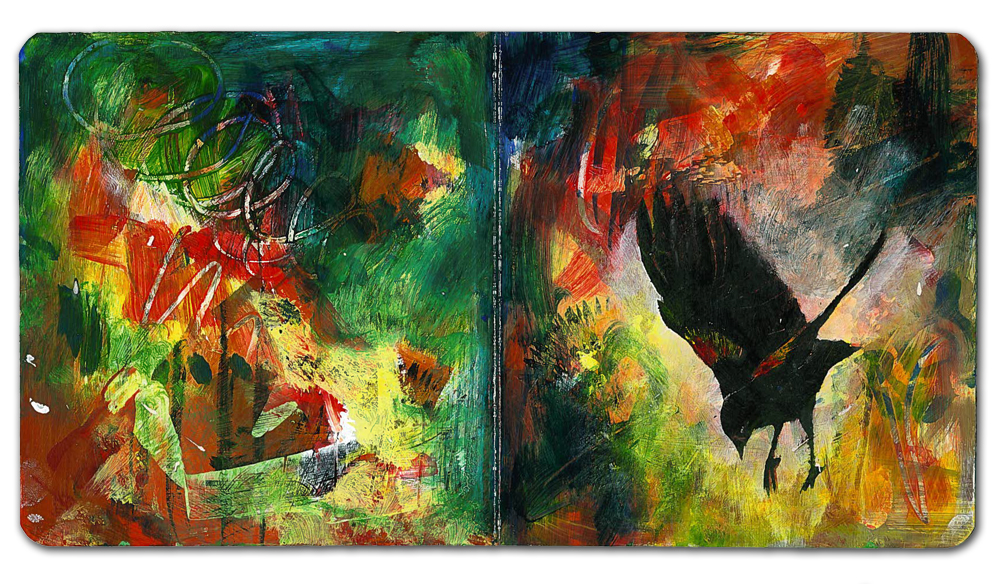 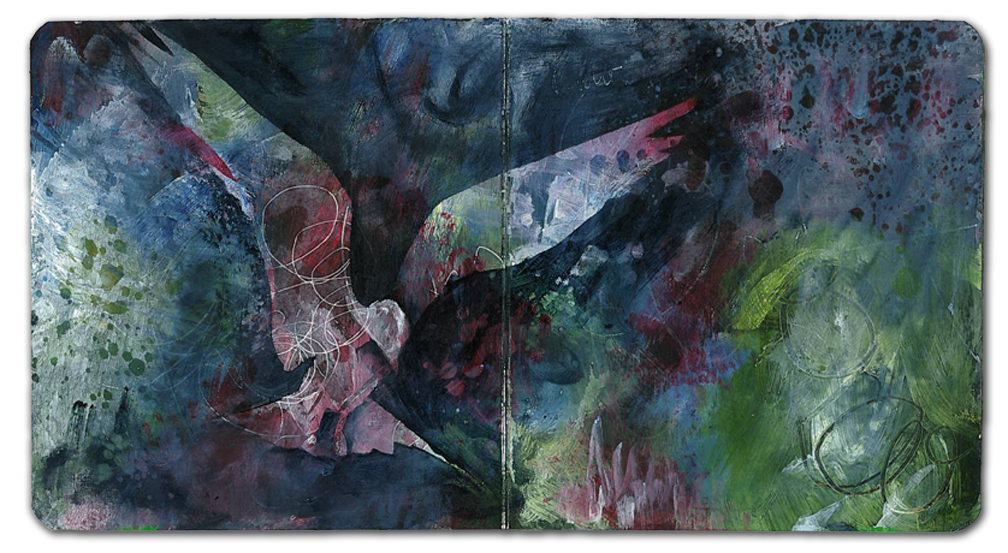 This was fun. Maybe I'll try to get back into the habit. And maybe I'll enjoy it this time.

Posted by Marianne Morris Art at 8:33 AM No comments: