February is Black History Month. According to Wikipedia, it has been celebrated in the USA and Canada since the 60s. The goal was to create an accurate and balanced understanding of black history in the school curriculum. Today, the contributions of black people to such areas as education, medicine, art, culture, politics and human rights are celebrated throughout the month of February, all across the continent.

When I first started working on my initial series of music themed paintings, I had no intention of ever painting portraits. The music I found so inspiring was created by musicians of all stripes, and what I was so intrigued with was how the musician and the instrument seemed to be part of each other... becoming the music. As I looked into the history of Jazz, however, I discovered this amazing cast of characters that I had known only vaguely from their music. This time I looked more closely at their lives, the times in which they lived, and how that culture influenced what they created.


The early days of Jazz are fascinating. Benny Goodman may have been the "King of Swing", but it certainly wasn't his creation. A good number of his scores were actually written by Fletcher Henderson, a black man. In a time where blatant racism was the norm, black musicians like Louis Armstrong and Duke Ellington developed a language of their own. They broke colour barriers, gaining popularity with both white and black audiences. Harlem became a hotbed of musical innovation. The Cotton Club, where many of them performed at one time or another,  was divided strictly along colour lines... the black people were on stage, the white people in the audience.

This portrait series is my tribute to the musicians that started it all. There will be 12 iby the time I'm finished. I could continue (there are so many, I could go on for years), but I have to put a limit on it somewhere. I'm also limiting myself to the early days, to that time in Harlem during the heyday of the Cotton Club and the Savoy Ballroom, the time of swing dancing and big bands and historic change in the musical landscape of the USA.

As much to limit any inadvertent copyright infringement as anything else, I'm working from really, really old photos. Finding photographer's names attached to shots any time before the digital era can be a bit of a challenge. So far I've worked out a few techniques... merging many photos to make a composite, going through hours of old video footage pausing to take screen shots, and using photos of the musicians in their senior years, with studio portraits as reference to age them backwards. I hope I'm capturing a likeness of their spirit, as well as their physical form.

Next up are Billie Holliday and Coleman Hawkins. Have a suggestion? Maybe leave it in the comments.....

Happens sometimes. Usually in February. I'm just so sick of everything. Sick of work. Sick of the crappy weather. The cold. The snow. The total lack of sun.

It's an odd thing... I'm usually pretty driven. I'm one of those people who is always doing something. Always have a project on the go, often two or three at a time. My schedule is packed. And then it will just hit me like a tonne of bricks. I just don't see the point in doing it anymore. All I want to do is crawl into bed and sleep until it passes. 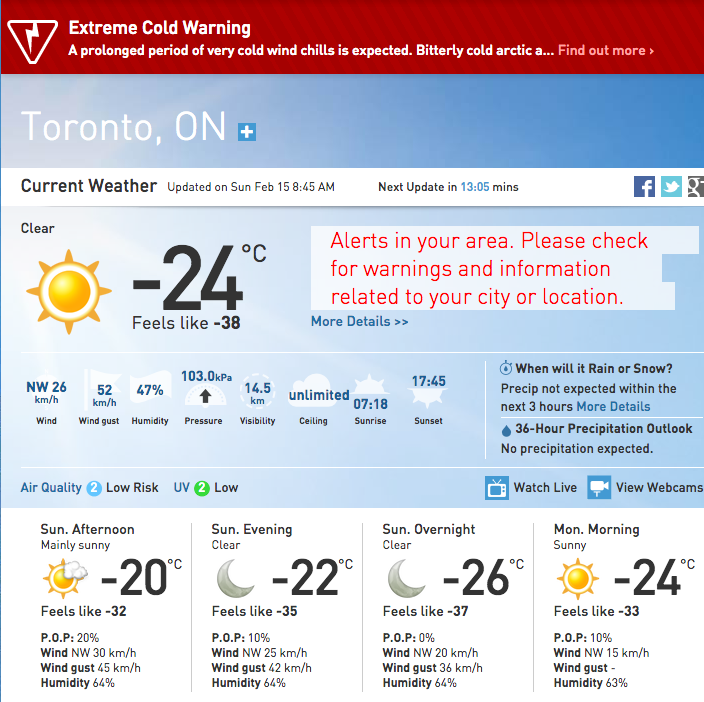 This is my local weather. Some days I can't believe I live here voluntarily.
Posted by Marianne Morris Art at 9:05 AM No comments:

I've not quite completed my patterns and grids book (I have the front and back cover left), but I felt I was ready to move on to a larger piece. I had a 1/4 sheet of watercolour paper that had been painted in a class with some samples... I can't remember what exactly it was, but it was a lovely intense turquoise with a metallic flake in it. I had been reluctant to paint over it, so it had sat in the pile for probably close to 4 years. Absolutely no point in that... I figured even if it turned out crappy, it was better than it just sitting there. After marking out a basic division of space I collaged on some text I tore out of a magazine and added layers of paint. The bubble wrap makes another appearance... I like the repetition and broken look of the print. By the time I finished I had toned down the intensity of the blue and lost a bit of the reflective quality, but I like it. I think I'm going to frame this one.

After thinking about the whole grid/map thing for the better part of a week, I think I have a solid theme for a series of at least a few paintings, possibly more. Connection. Questioning how we connect to each other today... through text. We don't really talk anymore; most of our communication is online or on our phones. We text, we email, we post things to social media... even when we are sitting across from each other we are obsessed with our phones, not really paying attention to what's going on. We are constantly connected, yet still somehow alone. I will use grids as a compositional format for each piece. I'm hopeful this will tie everything together into a series.

I never know when starting a new series exactly how far or deep I will go with it. When I started painting the musicians I figured it was good for about 10 pieces, and I think I did somewhere around 50. I love the idea of challenging myself to stick with this for the remainder of the year, but I'm afraid I might get bored before the end. The thing about boredom... it shows. I guess I'll just play it by ear.

I was sitting in my car last week with the radio on... stuck in traffic, of course... listening to yet another discussion about public transit in Toronto. For those of you in the area, you know this is an ongoing problem that doesn't seem to have any solution. On and on it goes... subways, light rail, busses, streetcars, blah, blah, blah. We need something, but there's no money. God, I'm so tired of it.

Like many other major cities, Toronto is laid out in a grid. Streets either run North-South or East-West, and if you know which way the street goes, you can't get lost. I was thinking about grid-lock when I finally saw it... grids connecting one thing to another, like lines on a map. Then repeat. Patterns and grids are all about repetition and connection. Now I know my direction.

I did the above spread in my Grids book using bits from a map I had in my stash o' stuff. The colours are the similar to my yellow spread from a couple weeks ago, only toned down considerably. I was still thinking about connections when I did this second piece on paper. It was already started, but I had lost it along the way. (Hooray, I used another thing from the pile!) It was a very bright blue/green when I started, but I was really feeling the muted tones, so I went with it. Sometimes when you start something you have no idea how things are going to work out.